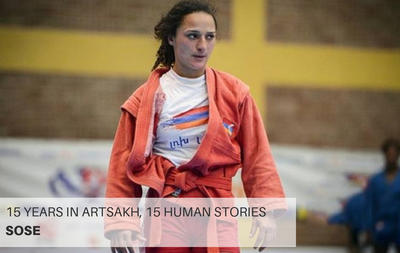 “All my victories, all my medals, all my achievements are for Artsakh. Artsakh is my hope, my inspiration, and my motivation”.

About 15 years ago, we launched an initiative to support the young, talented youth of Artsakh to realize their potential in fine arts, performing arts, and sports without having to leave their homeland to seek opportunities elsewhere.

Launched with 28 participants, the initiative eventually included more than 100 young persons from Stepanakert, Martuni, and Hadrut. Under the mentorship of accomplished artists and athletes, these young talents participated in rigorous training, workshops, and master-classes. The program also featured concerts, exhibitions, and other events.

Many of these young people, after graduating from the program, went on to achieve significant recognition in their fields of expertise. Some Balasanyan is one of them.

Sose is one of the most promising young athletes representing Artsakh in major sports. She has been practicing martial arts for 15 years already.

During this time, Sose has achieved some critical victories and received medals and awards in prestigious international competitions. A master of judo and sambo martial marts, the 27-year-old has participated in a range of essential games, from national championships to regional, European and international sports events.

In 2016, she participated in her first prestigious international competition – the European judo championship. Her first big victory was April 1, 2017, in Croatia, when she won a silver medal at the European Dzyudo Cup. She also has two bronze medals from prestigious sambo competitions.

After mastering judo and sambo, in 2018, Sose has received an invitation to try her skills in a new form of martial arts – wrestling. In her first competition, in Serbia, Sose won the first prize and received her first gold medal. At the time of the interview, Sose was training for her next World Championship in wrestling and sambo. “I am always looking for a new challenge for a new way to push myself harder. I guess this fighting spirit is just in my blood”.

The choice of judo and sambo was entirely accidental. Since a very young age, Sose was a very flexible and robust child, and she was always interested in sports, namely in gymnastics and figure skating. However, there were no gymnastics or figure-skating clubs or classes in Artsakh when she was growing up. “In general, our generation didn’t have many opportunities, not just in sports, but also arts, science, academics...”. So, Sose chose martial marts, simply because that’s what was accessible.

In 2008, Sose was selected to participate in the “Talented youth” initiative of the Tufenkian Foundation. This program solidified her interest in sports and helped her gain confidence in her talent as an athlete. After this, Sose never stopped training.

Sose’s childhood was not an ordinary one. Instead of focusing on school or playing outside like most of her peers, she devoted most of her time to her training. “Sports had become the meaning of my life.”

When she first started training, Sose was the only girl in the class. “For years, I was the only girl practicing judo. And people kept telling me to give it up, that martial arts aren’t for a girl. But I never let them stop me”.

In addition to training and competing, Sose work is an instructor. Sharing her skills and expertise with the children of Artsakh is supreme happiness for Sose. “I love working with children, helping them hone their skills, watching them grow stronger and more resilient, being a part of their victories.”

Currently, Sose has minimal time to devote to her students, but in the future, she plans to take up larger groups and mentor the future champions of Artsakh.

“I want to show Artsakh’s strength to the world. I want everyone to learn about Artsakh. That’s one of my biggest motivations.”