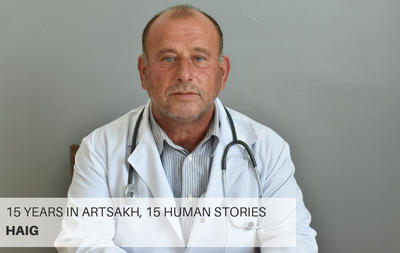 “Once we stepped into this house, we felt at home. It makes me so happy to see that my children love where they live. This support makes me feel welcome and once again reassures me that it was worth coming to Artsakh”.

Doctor Haigh Khatcho, who resettled in the Ishkahnadzor village of Kashatagh after fleeing from the Syrian War and escaping capture by ISIS, lives in a home provided by the Tufenkian Foundation and works in a clinic we built over ten years ago.

Haig Khatcho, originally Khatchatourian, was born in Syria, in the town of Ghamishli. Like many Syrian-Armenians, his family had settled in Ghamishli after fleeing from the Armenian Genocide. After miraculously escaping ISIS capture two times, he left Syria in 2015 and resettled in Artsakh to find peace and permanent home.

“I became a doctor to save lives, to help people who most need it, to be useful to society.” Before coming to Artsakh, Dr. Khatcho worked as a doctor for over 20 years, practicing general therapeutics, pediatrics, and gynecology.

When the Syrian War started, Dr. Khatcho was working in a village outside Ghamishli, which was under ISIS control. “Even though I feared for the safety of my girls, this village was in an extreme need of a doctor. As a doctor, you can’t just quit your job and leave”.

The first time he was captured by ISIS, they only interrogated him, but learning of his services to the local community decided to let him go. “They mostly questioned me about my religion. I explained politely but firmly that I would never give up my Christian faith. But, I suppose they thought I was too useful for the village and that, in the future, they could easily scare me into converting to Islam. So, they let me go.”

After this, Dr. Khatcho sent two of his older daughters back to Ghamishli, to stay with their aunt. His youngest daughter didn’t leave him under any condition.

The second capture happened during the night. They took him in front of his daughter’s eyes. “I said, let me put on clothes. And they said you wouldn’t need any clothes where you’re going”.This time, they kept him in the dark cell for hours, after which presented him the final ultimatum: he would either give up his religion or be killed. “I thought my fate was sealed right then and there. I would never see my daughters again.”

After he told his captors of his decision to keep his religion, they let him out of the holding place into an empty field. “They couldn’t shed blood inside the parameters of the residence, where they were keeping me. This was against their tradition. So, they would wait for me to walk away, and once I was far enough, they would shoot me”.

But, a miracle happened. This was before dawn, in an area where no cars usually drive. But, after he walked for a few minutes, a vehicle approached Haig. This was a villager who knew him very well and respected him. Even though this was extremely risky, the villager picked him up, and they drove away.

In 2015, Dr. Khatcho left Syria and headed to Armenia, the homeland his family had been forced to leave a century ago. Unlike most Syrian-Armenians he knew, Dr. Khatcho decided that he wouldn’t choose Yerevan as his new home. Instead, he wanted to live in one of the remote villages in Artsakh, preferably in the liberated borderlands. “I wanted to choose a place where a doctor was most needed, and a place away from the noise and fuss of the city.”

This is why he chose Ishkhanadzor, a village in Artsakh’s south, in the liberated Kashatagh region. Here, he found the peace and tranquility that was so missing from his life. “I was never fully happy in Syria, and I never felt quite at home,” said Haig. Here, in Artsakh, he finally feels that he never needs to move again. “It’s not enough that these lands have been liberated. No, we need to make sure these villages live on”.

Haig Khatcho’s three daughters were teenagers when they first came to Artsakh. At first, during the first week or so, they found it hard to adapt to their new home. “Where have you brought us? - they would say to me”, remembers Haig. But once they felt the love, the care, and the warmth of our new neighbors, once they started playing with other kids in the village, Ishkhanadzor became home very quickly. “My only regret is not bringing my girls to Artsakh earlier so that they would spend their early childhood here.”

Almost immediately after moving to Ishkhanadzor, Haig Khatcho started working in the Ishkhanadzor clinic, built by the Tufenkian Foundation. He was happy to resume his practice right away and to finally put his skills to use for the people of Artsakh.

“I had no difficulty adapting to life in Ishkhanadzor. I had always thought about returning from Syria for a long time, long before the War started, but something would always get in the way”.

The only difficulty was the housing situation. Like most houses and other buildings in Ishkhanadzor and the rest of Kashatagh, the house given to Haig Khatcho was in bad shape. It was poorly built, damp, dark, and unsafe. “This wasn’t a place we could continue to live in.”

However, this situation would soon change. In 2017, Haig Khatcho received a newly built and fully renovated home in Ishkhanadzor. The Tufenkian Foundation built this house as a part of its efforts to rebuild and resettle Kashatagh’s villages and provide housing support to re-settlers, including Syrian-Armenian families.

“Once we stepped into this house, we felt at home. It makes me so happy to see that my children love where they live. This support makes me feel welcome and once again reassures me that it was worth coming to Artsakh”.

Today, Haig Khatcho and his daughters proudly call themselves Artsakhtsis. They enjoy the respect and friendship of the villagers, and cannot imagine ever leaving Artsakh. “Everyone knows me here; you won’t find a single family that I haven’t helped with my medical skills at least once over the past three years.”

When he is not at the clinic, Haig Khatcho is busy cultivating the land adjacent to his house. “I’ve always been fascinated with agriculture – with the art of working with the ground, growing new things, watching my surroundings change, and bear fruit as a result of hard work. With the help of his daughters, Haig cultivates a variety of fruits, vegetables, and crops, including some unusual types like olive trees. He is also one of the few people in the region to keep ostriches in his yard.

“People often ask me if I’m not bored here. I spent my last years in Syria, fearing for the safety of my children, and dreaming of peace. Now, I spend my days helping people in the clinic and working on the land of my ancestors. And on top of that, I’m excited to learn a new profession [agriculture] after three decades of working in medicine. How can I ever feel bored?”

Haig’s eldest daughter has already been accepted to the Medical University in Yerevan. She has decided to follow her father’s footsteps. His second daughter also wants to become a doctor. And the youngest daughter wants to polish her skills in agriculture and has decided to study agronomy in Stepanakert, as opposed to moving to Yerevan like her older sisters.

All three girls have decided to stay in Artsakh after their studies. “If they ever change their mind and decide to move elsewhere, I won’t mind. But this is their home now, and there is no reason for them to live somewhere else”.