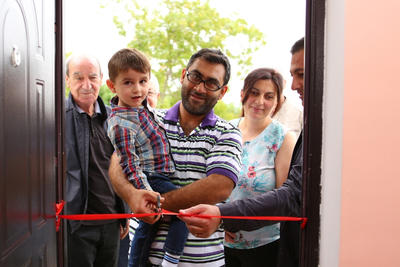 “Living in a village, you learn about the importance of support. Here, everyone supports each other, be it with a cup of sugar or a kind word. Right now, a good home is all the help my family needed in order to stay and live in Artsakh. Getting this house is just a dream come true”.

33- year-old Artin was born and grew in Syria. Now, he lives in Kashatagh, the liberated region connecting Artsakh to Armenia.

Artin had to leave his home in 2015, because of the Syrian War. He immediately chose to relocate in Artsakh and find new home in this ancient homeland of Armenians, instead of opting for Europe like many young people from Syria.

A professional electrician,  Artin primarily worked in construction, as well as other electricity-related projects back in Syria. He also owned and managed a small shop, which mostly burnt down during the War.

Artinn lived and worked in Damascus, the capital city of Syria, and, before moving to Artsakh, he fought in the Syrian War for nearly 5 years. After years of being in the epicenter of the conflict, all Artin wanted was a simple life in an Armenian village, a family of his own, and peace and quiet.

This is why, after arriving to Yerevan, he only stayed there for 2 days, and left for Kashatagh as quickly as he could. Back in Syria, he had heard about the Ishkhanadzor village, where several Syrian-Armenian families had settled. “I really liked the idea of settling in a liberated village. I was born and grew up in a foreign country, and I was always aware of that. Now, I would live in Kashatagh, the place where the Armenian world starts”.

Shortly after moving to Ishkhanadzor, Artin married a local woman. Now, he is a father to a little boy, Mher. His second child, a girl named Varduhi, will be born soon.

Currently, Artin’s family lives in a house that’s not in a good shape – there is no kitchen or bathroom, and the construction is not very secure. Because they have no flooring or ceiling, the home is always dusty and very difficult to clean, which makes it a dangerous place for the small children. They also have no running water. “I can live anywhere, and I can endure any conditions. But I want only the best for my children. I want them to grow up with dignity and I want to keep them away from any suffering", said Artin.

Unfortunately, poor housing conditions aren’t a rarity in Kashatagh. The 70 years of foreign occupation have left the region largely in ruin – not only destroying homes, but also stripping it off essential infrastructure like clinics, schools, water systems, etc.

Fortunately, the situation is changing – more homes are being built or renovated every year. One such home is currently being built for Artin’s family by the Tufenkian Foundation. “I can’t begin to explain, how much better this new house will make our lives. Every mother dreams of a good home for her children, and now this dream would come true”, said Artin’s wife.

Artin’s wife is from the Khachik village of Yeghegnadzor. She resettled in Artsakh about 6 years ago, and teaches Armenian language and Literature in the local village school.
Like most of their neighbors, the family makes their living with animal farming and agriculture. Together with his wife, Artin cultivates a rather large piece of land, growing fruits, vegetables and other crops. This year, the family is focusing on cultivation of wheat and other grains.

“A villager’s life is not easy or carefree. But these are the good kind of difficulties, not like the ones I had back in Syria, during the war. We are earning our living with our honest sweat, we help each other and share in each other’s sadness and happiness. It is just what I always wanted”.